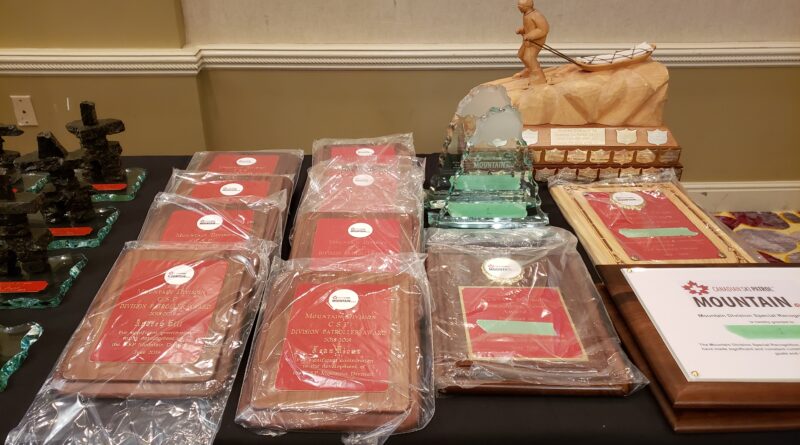 Division events Uncategorized
2020-10-172021-09-20 geoffscotton 0 Comments
[:en]Each year the CSP Mountain Division recognizes members that have gone above and beyond in their commitment through an array of awards ranging from appreciation awards to division life member designations.

These awards were announced earlier in October following the release of national awards. Those national awards included three CSP national life memberships going to division members: Pam FitzGerald of Edmonton Zone (No. 73), and Ken Lukawy (No. 75) and Sandra Williams (No. 76), both of the CSP Calgary Zone.

The full list of 2020 CSP Mountain Division Award winners can be found here. They represent members from across the division, stretching from the Yukon to southern Alberta. We’re very proud of them – and thankful to have them on our great team!

In 2020, the CSP Mountain Division bestowed its highest honour, life membership, to Darrell Littlejohn of the CSP Edmonton Zone (No. 31), and to Lance Barclay of the CSP Southern Alberta Zone (No. 32). Both have been long-time supporters of multiple division activities, leaders in education and strong contributors to the division’s skills seminars and competitions, the CSP Mountain Division First Aid and Skills Training (FAST).

The 2020 CSP Mountain Division Most Valuable Patroller Award was presented to former CSP Calgary Zone president Jean Rioux, for his leadership in supporting zones across the Mountain Division and in guiding change and modernization in national CSP governance through the organization’s zone presidents.

Howard Anderson, a long-time Calgary Zone patroller and former Lake Louise CSP patrol leader received the George Ennis Outstanding Contribution Award, for his many efforts to support the CSP, from World Cup to ski instruction to patrol leader support to organizing a patrol team to support the 2022 Winter Olympics in Beijing, China.

The CSP Calgary Zone was named the 2020 Outstanding Zone in the mountain division for its many contributions to, and leadership of, the CSP at both the division and national levels.

A special recognition award was presented to Geof Liddon, formerly of the CSP Calgary Zone, for his many contributions and commitments in education and training and as an extraordinarily active duty patroller.

These awards recognize the amazing contributions of individuals and groups that are making a difference and helping the CSP succeed in its commitment to excellence. Congratulations to all.[:]