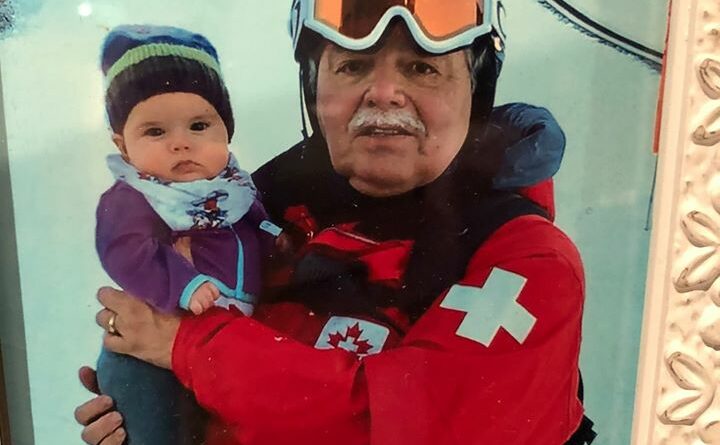 Sid Gaudry’s family and members of the CSP – Qu’Appelle Zone spent the evening of January 7th honoring Sid and recognizing his years of service and his many contributions to the Canadian Ski Patrol.

It was apparent that Sid’s contributions to the CSP involved many friends who had become very close to him. Also, Ski Patrol for Sid had always been a family affair that included Caroline, his wife, and his kids, Jacqueline McIlmoyl, Nichole Diewold, and Robert Gaudry.

Talking about her dad, Jacqueline noted how she and her siblings had accompanied their parents to Mission Ridge on weekends while listening to the music of Andrew Lloyd Webber and Stan Rogers. Their dad assigned them the role of “junior patrollers” which they were quick to embrace, gravitating like magnets to every incident. They would set up a protective perimeter and enthusiastically advise the public to stay away.

Both Sid and Caroline took on leadership roles in the early years of the Qu’Appelle Zone, serving as zone president and in other capacities. In the tradition set by their dad, Sid’s daughters became Ski Patrollers and are active in the CSP – Qu’Appelle Zone today.

No doubt Sid accumulated a lot of positive karma as a volunteer serving others. It paid off when his family’s ski patroller training saved his life. Sitting down to brunch at a family restaurant with his wife, and daughters’ families including 6 grandchildren, Sid began seizing. Jacqueline and Nichole used their CSP first aid training to administer CPR, retrieve a nearby defibrillator, and stabilize their father before emergency services arrived. His recovery allowed him to be present for this special evening of tribute.

Throughout the evening Ski Patrollers paid tribute to the man who had given generously of his life and his time in service to those who ventured onto the slopes. John Humbert began the testimonials by reading a Letter from Marco Romani Chair, CSP Board of Directors, in which he recognized Sid’s years of service (see below).

A sample of what Sid’s friends and fellow patrollers said about him follows.

“Sid has done every job in the Ski Patrol. Above all, he is humble and dedicated.” (Gord Joorisity)

Quoting the idea of the songwriter, Ian Tyson, “From all these roads we’ve traveled down, I’m a better man for knowing you.” (Doug McDonald)

“He’s always been a great representative of the Ski Patrol, and I am proud to call him a friend.” (Terri Renwick)

“Your approach to life is inspirational to all of us.” (Dennis Ambrose)

“I am old enough to say this to Sid – I love you! You are a wonderful man.” (Dan Cameron)

And in a lighter vein, “I remember the time you got off the ski lift too soon. If I am correct, you ended up sitting on your ski pole.” (John Humbert)

And if you happen to talk to him, be sure to ask him about the true story of what really happened to the Jamaican bobsledders at the 1998 Winter Olympic Games in Calgary. He was present and involved.

Letter from Marco Romani Chair, CSP Board of Directors

On behalf of the Canadian Ski Patrol Board of Directors I would like to congratulate you on achieving forty years of service with us. You are one of an elite number of proud passionate and professional members to have reached this level of service.

Your years of dedicated service serve as a role model for new patrollers, two of whom are your own daughters. They are also recipients of Life Saving Awards a testament to your dedication to CPR training throughout your years as a patroller.

Thank you for the countless hours that you have volunteered over these forty years.