Four members of the Deans-Benham family joined the CSP in Parkland Zone, Saskatchewan Division this season and theirs is an interesting story.

It all started last year when one of the family’s kids broke his wrist on a jump at Duck Mountain, their favourite resort. (Duck Mountain is in east-central Saskatchewan, close to the Manitoba border.) Everyone in the family has first aid training and Dad is a volunteer first responder as well, so their training was put to good use to splint him and then transport him to the local hospital in Kamsak. Upon learning of the story, the hill’s general manager asked if the family was interested in rekindling the ski patrol and in the words of Matthew Benham (Dad), “How could we say no?” The drive to Duck Mountain is 2.5 hours each way and they are at the resort almost every weekend.

The four members of the family who joined took their in-class training through Qu’Appelle Zone in Regina, which is fairly close to their home, and then completed the on-snow component at Asessippi Ski Area and Resort. Talk about dedication. Within the family there is also a pool of future patrollers since there are six more children who have not (yet) joined the CSP but when they are old enough to do so, they probably will! 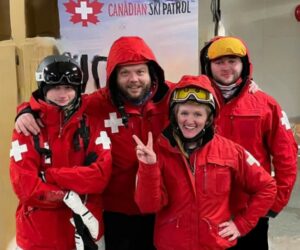