Bart Meuring was in attendance at a general meeting of the Royal Canadian Yacht Club in Toronto in late January, 2019. After one of the speakers returned to his seat near the front, Bart noticed a commotion from that area. Making his way towards the incident, Bart saw an unresponsive man lying between the chairs. Detecting no pulse, Bart commenced CPR. He was quickly jo 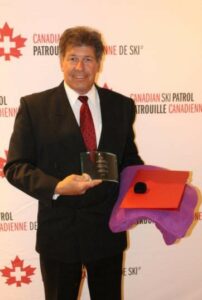 ined by a nurse who assisted with both compressions and ventilations.

An AED arrived, was applied, and it called for a shock to be delivered. CPR was continued, and after feeling some resistance to the rescue breathing, Bart checked for, and found, a faint pulse.

The patient began to regain consciousness and become more alert. Paramedics arrived after another 10 minutes, being delayed due to a snowstorm, and found the patient stable and transported him to hospital where he received a stent and post therapy.

The doctors stated that the patient had suffered a heart attack, and survived due to the immediate first aid attention he had received. The patient was very appreciative of all who helped and has commented that he would not be alive today without their interventions.

Bart himself has said “I was thankful for the years of repeated, relentless training that the CSP insists on.”

The CSP was pleased to present Bart Meuring with the John D. Harper Lifesaving Award at the 2019 Altitude conference in Toronto.