Devon Murphy had just finished an evening of CSP recruiting at D’Arcy McGee High School in September, 2018 in Gatineau, Quebec. As he was leaving he noticed an ambulance pulling into the parking lot at approximately the same time he heard a cry for help coming from the main gym.

Upon entering the gym where a ball hockey game had been going on, Devon observed a goalie performing CPR on a large man who appeared to be unresponsive and not breathing with signs of acute cyanosis. 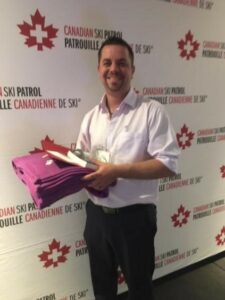 Devon approached and identified himself as an off-duty paramedic and ski patroller and immediately attempted to secure an airway. The patient was very large and in full ball hockey gear, thus making it very difficult to perform compressions. Further, although the school had an AED, it could not be easily located. It had been moved from its regular spot as the school was undergoing some minor renovations.

When the paramedics arrived, Devon was able to access their equipment and insert a nasal airway into the patient and then using a bag valve mask established a clear airway. A second paramedic arrived with an AED and after administering one shock, the patient began to regain colour and consciousness. He was quickly taken to the hospital where he underwent heart surgery to insert a stent.

Without Devon’s quick response to establish and maintain a clear airway in a time sensitive manner the outcome may have looked very different for this patient. Today, this individual continues to play ball hockey, enjoys spending time with his daughter, properly warms up for physical activity and is incredibly grateful for the actions of Devon and those who acted to save his life.

In recognition of his actions, Devon Murphy was presented with the John D. Harper Lifesaving Award at the 2019 Altitude conference in Toronto.