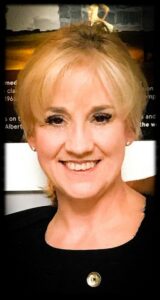 In 2018 Pam FitzGerald was approached to develop the financial oversight committee to provide a transparent and consistent review of financial matters at the national level. She wrote the terms of reference and subsequently accepted the role of chair of the committee. Since then she has developed a national policy and procedure for expense claims, and audited the various resorts memoranda of understanding to allow for evaluation of any financial risk.

As part of her work completing the CSP’s federal CRA T3010 report she has developed and implemented a national financial reporting system allowing a better understanding of the financial situation across the organization, including development of the national budget and rewriting the chart of accounts. Along with the improved financial reporting systems she has put in place, this is a legacy that will last.

Pam gives generously of her time and expertise across all levels of the CSP. She has been heavily involved with review of various national proposals and plans, providing well-thought-out and researched responses and suggestions for modifications where necessary.

Pam continues as the Edmonton Zone and Mountain Division vice-president of finance in addition to her national role. She can always be found at Edmonton Zone executive meetings and Mountain Division executive and board meetings and also volunteers a considerable amount of her time for fundraising and training initiatives. Additionally, until three years ago she was also the patrol leader at Snow Valley Snow Resort in Edmonton.

Pam is known for dressing for her part as a financial professional at all the meetings she attends, setting an haute couture standard and example for her fellow patrollers to follow. In this pursuit it is reported that Pam is still waiting for success!

The full text of Pam’s nomination can be read here. 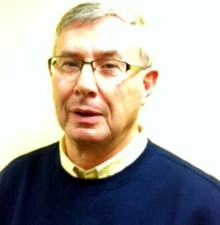 Harold Goldstein (affectionately known as Goldie) has been an active member and builder of the CSP in Central Zone and across the country for more than 50 years. In 2019 Goldie was awarded the Sovereign’s Medal for Volunteers which recognizes the exceptional volunteer achievements of individuals from across the country or abroad in a wide range of fields. The official citation reads, “Harold Goldstein has dedicated over half a century to volunteering with the Canadian Ski Patrol, taking on positions such as patrol leader, trainer, national statistician, and Ontario Division Vice-President of Operations. He has provided advance first aid services both on and off the ski hill, and work with local medical professionals to improve the assistance available to those involved in emergencies.” He is also the recipient of the government of Ontario Volunteer Service Award along with recognition in the CSP at the zone, division and national levels.

Since 2008 Goldie has coordinated Central Zone’s field days and continues to be a key member of the Central Zone President’s Cup competition team, assisting in competition design, set up and results tabulation, among other things. He encourages new generations of leaders and remains to advise and assist them as they face their various challenges, always looking to the future. Goldie represents stability with Central Zone and is a living link to the earlier years of the CSP.

The full text of Goldie’s nomination can be read here. 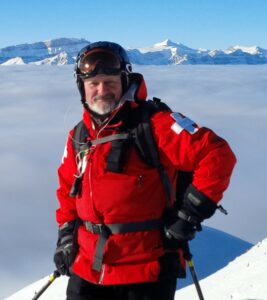 Ken Lukawy hails from Calgary Zone and has been a leader and builder of Nordic patrolling and telemarking in the mountains starting in the mid-1980s. He qualified as a Canadian Association of Nordic Si Instructors Level 1 and Telemark instructor. He shared his expertise and provided weekly ski improvement sessions at Canada Olympic Park for CSP members. At the 1988 Olympic Winter Games held in Calgary, Ken served in athlete medical services at the Nordic venue in Canmore, in addition to participating in two pre-Olympic years with World Cup test events.

Across the CSP Ken is perhaps more well known for his ongoing work in avalanche education which he has been involved with since the mid-1990s. Currently Ken serves as the national avalanche program coordinator along with being the avalanche awareness/education contact for Calgary Zone and Mountain Division. He provided overall coordination of a major rewrite of chapter 11 of the patroller’s manual on avalanche safety and rescue which took two years of solid work, in addition to creating collaterals to support the update and the presentation Introduction of Avalanche Safety for Patrollers. He revised and updated these documents in 2017. If it were not for Ken’s work in avalanche awareness with a small group of supporters, the CSP would not have an avalanche program and would not be involved in avalanche awareness.

Ken’s style is leadership by example through quiet, persuasive discussion and action. He is a member of a small core group who can always be depended on.

The full text of Ken’s nomination can be read here. 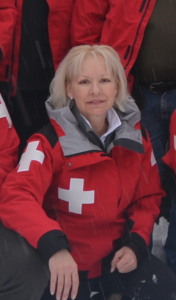 Sandra Williams also comes from Calgary Zone and has been a builder since she joined the CSP. Beginning in her second year of patrolling, Sandra has held leadership positions at every level of the system. Her efforts have created greater visibility for the CSP and have enhanced our reputation. Our success as an organization can be traced to her outstanding efforts in each of our pillars: education, safety and operations.

Sandra strongly believes in the power of a team and attributes success to the commitment of her team. Specific accomplishments include attainment of Alberta provincial accreditation for the CSP helping to position the organization for national accreditation and advanced first aid status; working closely with the Thinkfirst Foundation in the creation of the video A Little Respect: Think first!,- the first of its kind in the sports industry highlighting the severity of concussions and creation of concussion cards still in use in the ski patrol today; bringing visibility to the safety portfolio and upholding our mission statement by executing the first safety stream at a national annual conference, creating and inspiring a national safety team. Her extensive work in critical incident stress management (CISM) has gained the CSP respect from the emergency responder community. As a leader, Sandra is very modest about her accomplishments and attributes her success to her team.

With Sandra’s leadership the CSP has gained visibility and an enhanced reputation within the ski industry and beyond through her involvement in safety and CISM. We can trace our success in national first aid accreditation to her early efforts. At her ski area, she has positioned the CSP to provide distinctive roles at the area. She left every position in good shape and has provided strategic direction allowing her successor to springboard from her achievements. Just because Sandra’s name is not familiar to everyone does not detract or diminish the significance and depth of her accomplishments.

In almost 30 years Sandra’s commitment has never wavered and she has continuously contributed to the organization in a very quiet way. Her actions have built a stronger CSP.

The full text of Sandra’s nomination can be read here.