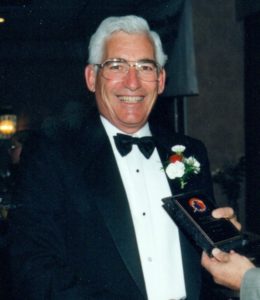 Bill Esdale began his 27-year patrolling career in 1976 in Kawartha Zone at Dagmar Ski Resort, home for his entire CSP career. Over the years, Bill served as Dagmar’s patrol leader, in various positions within the zone including president, and was one of the co-founders and long-time manager of the hugely successful and long-lasting zone ski swap. He developed various computer programs to manage the swap, a skill-set he also deployed throughout his patrolling career at all levels for multiple purposes. In fact all of the programs Bill created have formed the prototypes for systems in use to this day.

He then graduated to Ontario Division, holding a number of positions, culminating in the role of division president. Under his leadership, the division created a zone presidents’ manual and implemented a workplace and discrimination policy, both of which are the bases for what we have in place today. In the mid-1990s Bill became acutely aware of the major financial concerns at the national level and gained the approval of the division to make a major donation to the national level to avoid a steep increase in membership fees and a deficit financial position.

When his time at the division level ended, Bill became a member of the national board of directors and was the first Ontario-based director not to hail from Central Zone which, at the time, was big news indeed. Bill was quiet and unassuming and very effective as he always asked the right questions when they should be asked and sought sensible solutions to the various issues of the day.

Upon retiring from the CSP and his paying profession, Bill and his wife Joan (also a long-time Kawartha Zone patroller) hopped into their motor home and toured extensively across North America for many years as well as enjoying many trips to Europe.

Bill was recognized at all levels of the CSP for his contributions, including Kawartha Zone Life Member No. 5 (1992), CSP No. 512 (1986) and LM No. 42 (1999). Oh, yes, Bill was also the proud owner of a set of ‘pink sleeves’ from the 1988 Winter Olympic Games held in Calgary where he worked at Canada Olympic Park on the freestyle and disabled skiing venue (at the time both demonstration sports and long before the advent of the Paralympic Games).