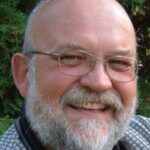 Paul Druitt joined the CSP in Ogopogo Zone in 1977, having developed a love of snow and sliding on it when he was just three years old. As he grew up he became an excellent skier so joining the CSP was the next logical step, especially since he was living in Kelowna and area at the time.

Paul was dedicated to his various roles within the CSP and his home office is filled with awards from various levels recognizing his multiple contributions. Over the course of his patrolling career, Paul served as Ogopogo Zone president, Pacific South Division president, and in various other zone and division capacities along the way. He was also a key member of the CSPS 2010 Implementation Committee which was instrumental as part of the winning bid for the Winter Olympic Games held in Vancouver in 2010. Whatever the task, if it needed doing and Paul was asked, it was considered to be done.

Paul is perhaps best known across the country for his former leadership of the national awards committee, where he brought his flair for organization and ensuring that all of the historical information available was properly documented. He brought the NDS awards listing for each member up to date with respect to any national awards received, along with those in his own Pacific South Division. He ensured that the national information was updated annually immediately after each year’s awards were presented.