Thanks to all the patrollers who have stepped up to showcase their nifty gadgets. We hope you will find them interesting and useful. In this issue we’re featuring watches, a critical piece of kit for all patrollers, and accessories on watches.

While the cell phones most of us carry come with a time piece, their use as a watch on the hill is discouraged due to the possibility reduced battery power in cold temperatures and the strong possibility of loss and damage at an accident scene.

I’ve found that a clip/carabiner digital watch is fantastic for checking the time on scene. The carabiner clip can be attached to a vest, jacket zipper pull or straps of a back pack. I leave it attached all winter. The one shown is similar to the one I’ve had for more than seven years now. I replaced the battery for the first time last season.
We’ve also included a similar analog version. 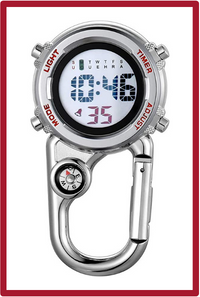 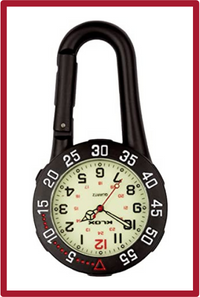 Many watches host any number of gadgets including an altimeter, a device that measures altitude, the distance of a point above sea level. Guest contributor Nate Sereda, an AMCG Ski Guide in British Columbia, recommends an altimeter for route-finding in the backcountry. Nate learned to use a combination of altimeter, topographical maps and compass to navigate through the backcountry.

These days, most backcountry users rely on a GPS for direction finding. GPS technology has come a long way and is nearly infallible…

When it comes to backcountry skiing, my altimeter, in particular, is probably my most-used gadget. Knowing your exact altitude, along with the orientation of the slope you’re on is absolutely critical. Without this knowledge, you may ski or walk into a zone where a hazard exists, such as a buried surface hoar layer that only presents itself at a certain altitude. Temperatures vary at different elevations which can impact the safety and quality of the snow at different altitudes. Without an altimeter, you will be guessing at what altitude the snow changes. When you’re shredding waist deep powder, this is easy to miss and can lead to serious consequences. I was caught in a small avalanche where I missed the elevation band hiding surface hoar. It was a stark reminder to consult my altimeter!

Call me old school, but my GPS stays in my bag most of the time while I navigate with my trusted altimeter and a topo map. Of course I make sure the GPS is fully charged and has the relevant maps of the area, just in case…!

Thanks to Kerri and Nate for sharing their suggestions with us.

Please forward your great ideas and we will share them in upcoming issues of 5/5.